Whether you’re a photographer, designer, illustrator, or simply a design enthusiast, understanding the golden ratio and how it works will help bring structure and balance to your next project.

What Is the Golden Ratio? 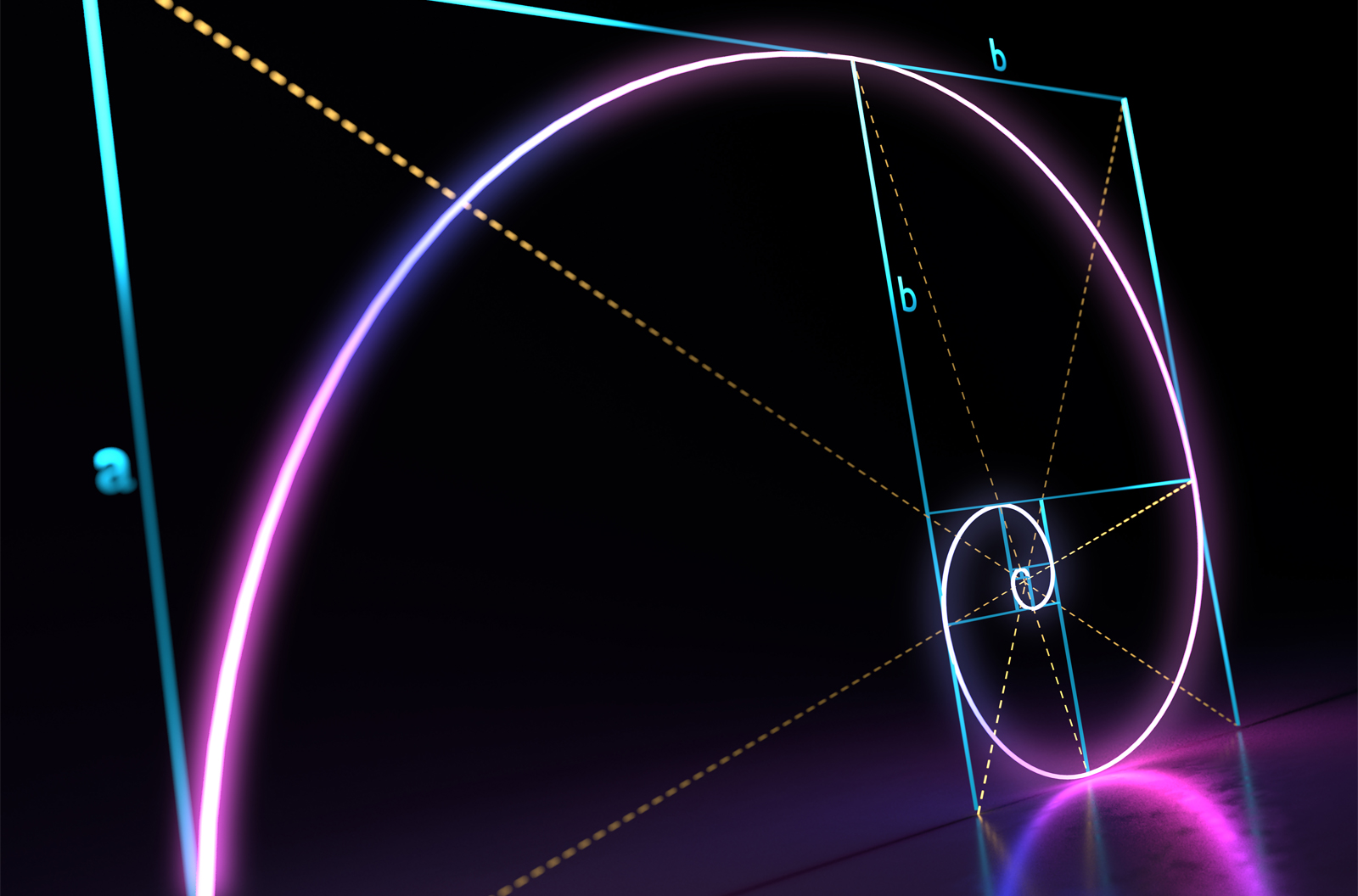 The golden ratio is a mathematical calculation designers can use to create striking visuals that capture a viewer’s attention.

The golden ratio and its corresponding shapes are naturally found throughout nature. It has become the perfect tool for creating balanced, harmonious designs that have an innate appeal to humans. Designers can use the golden ratio to design compositions that are esthetically pleasing. Rooted in nature and found throughout history, it continues to be an exceptional tool for any modern designer.

To break down the math, the golden ratio is achieved when a line is divided into two parts and the longer part (a) divided by the smaller part (b) is equal to the sum of (a) + (b) divided by (a) and both equal 1.618.

Is the Golden Ratio the Same as Fibonacci Sequence?

The Fibonacci sequence is easy to learn. Starting with the numbers 0 and 1, every successive number is determined by adding the two previous numbers in the sequence:

The discovery of the Fibonacci sequence (and subsequently, the golden ratio) goes back centuries to when historians started to observe the naturally recurring patterns in nature. From leaves to flowers to shells, it was discovered that all these organic elements had a common pattern. How the Fibonacci sequence relates to the golden ratio is once again, through the math. The ratio of successive pairs of numbers in the sequence approximates 1.618. Five divided by 3 is 1.666, 8 divided by 5 is 1.60, and the pattern continues.

Golden Shapes for Use 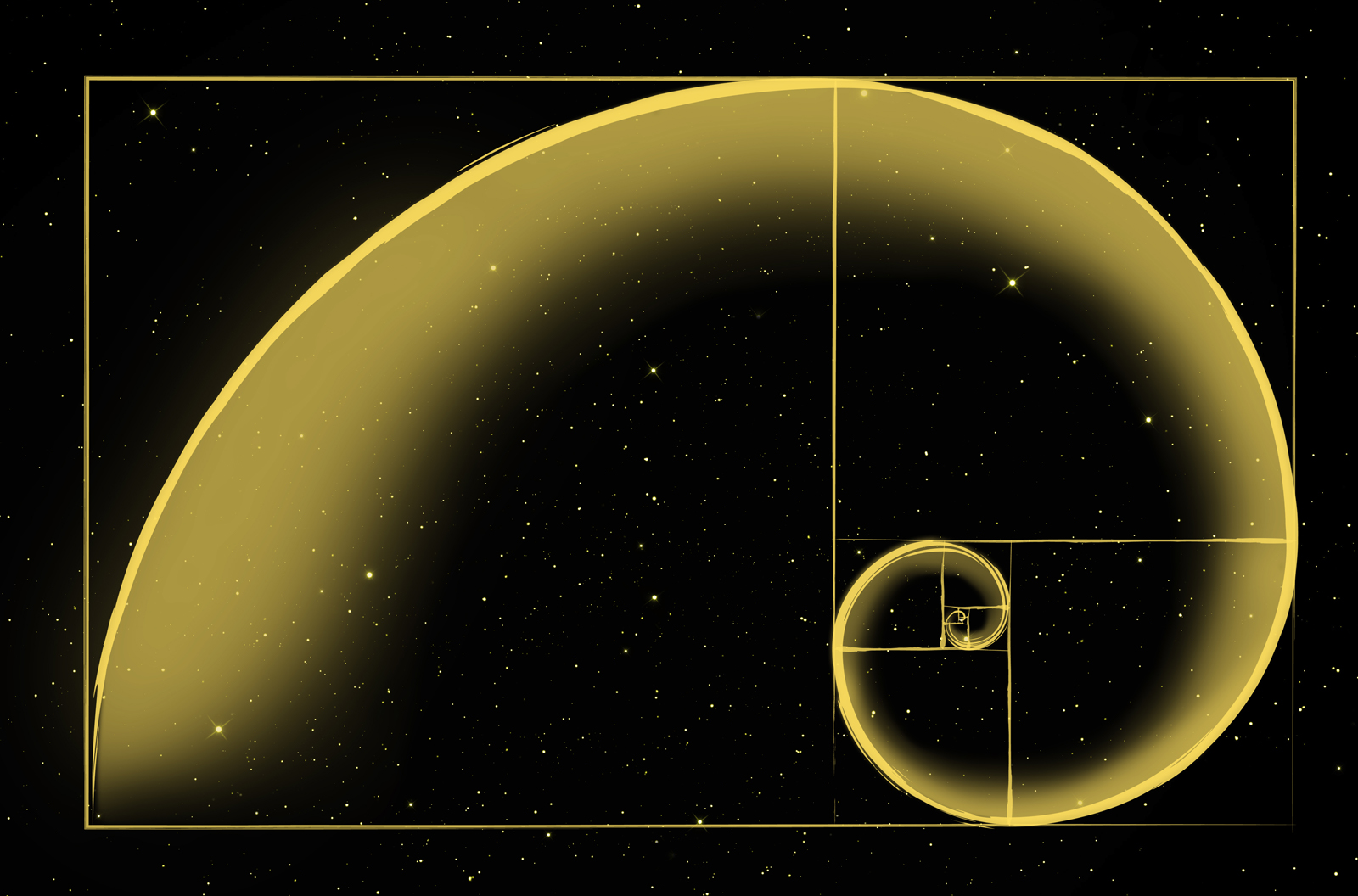 The golden ratio can create a variety of proportionally pleasing shapes in design. The most used golden shapes are golden rectangles, golden circles, golden spirals, and golden triangles. These golden shapes can be used by themselves or in combination to create balanced and esthetically pleasing design compositions.

Using golden rectangles in your content and design formatting can help ensure your layout is proportional and calculated.

Use your new rectangles to draw a golden spiral by starting in one corner of each square and ending in the opposite one.

Designers and marketers can use the golden spiral to determine where to place content in advertisements and marketing displays. The human eye naturally follows the curve and looks for details within the center of the spiral which makes it the perfect location to place your most critical details.

How Do You Use the Golden Ratio? 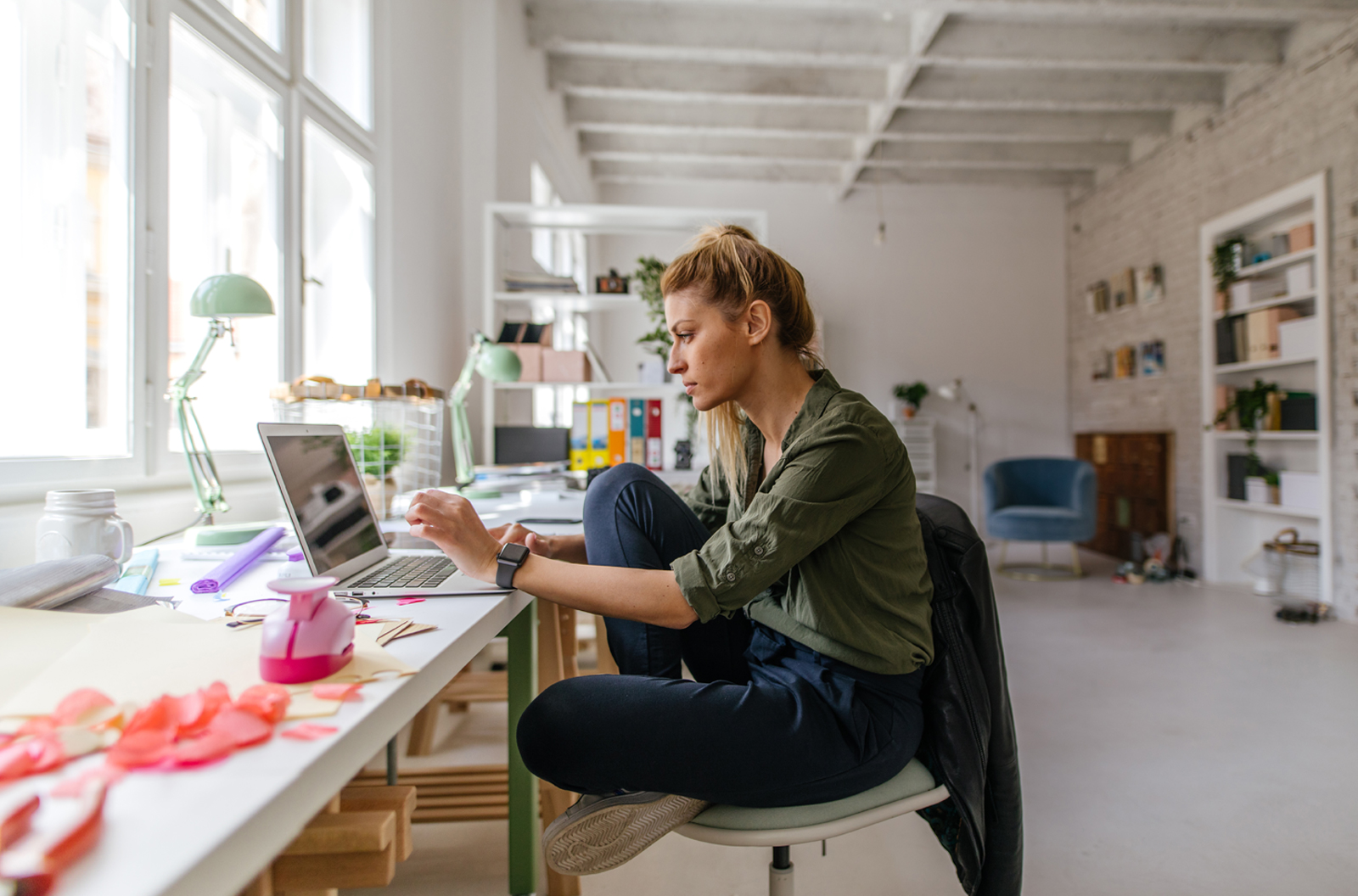 The golden ratio and its associated shapes can be used throughout many elements of design including spacing, content, and layouts.

Use the golden ratio as a guideline for determining the dimensions of your next layout. One easy way to practice this application is to set your dimensions to 1:1.618.

For example, take your typical 960-pixel width layout and divide it by 1.618. You’ll get 594 to create the height. Now break that layout into two columns using the golden ratio. Working within these two shapes, your layout will abide by the naturally esthetic proportions created by the golden ratio.

Spacing is a crucial, and often time-consuming, element of any design. Use the golden ratio to first create a golden rectangle, and then use the formula to create the subsequent squares that indicate where important design elements should be placed. Using the golden ratio in your layout will ensure the spacing and proportions are calculated and precise rather than eyeballed or guessed.

The golden spiral creates the perfect visual guide for determining where content should be placed. Focus the most important elements of your design within the center of the spiral so the reader sees what you want them to see.

Using the Golden Ratio in Typography

The golden ratio can be used as a guide to determine the best size for different text hierarchies within your design project. First, choose the size of the body text. Multiply this number by 1.618 and round to the closest whole number to give you a heading size that is proportionate to your existing body text. The numbers can also be used in reverse. If you have a predetermined text size and need to figure out which size is best for the body text, simply divide by 1.618 and round to the nearest whole number.

Triangles, squares, circles, and spirals are all golden shapes that can be used while designing an icon or logo. Using golden shapes in your logo design can help create balance and proportion that helps draw the viewer in and makes your logo eye-catching and memorable.

Examples of the Golden Ratio 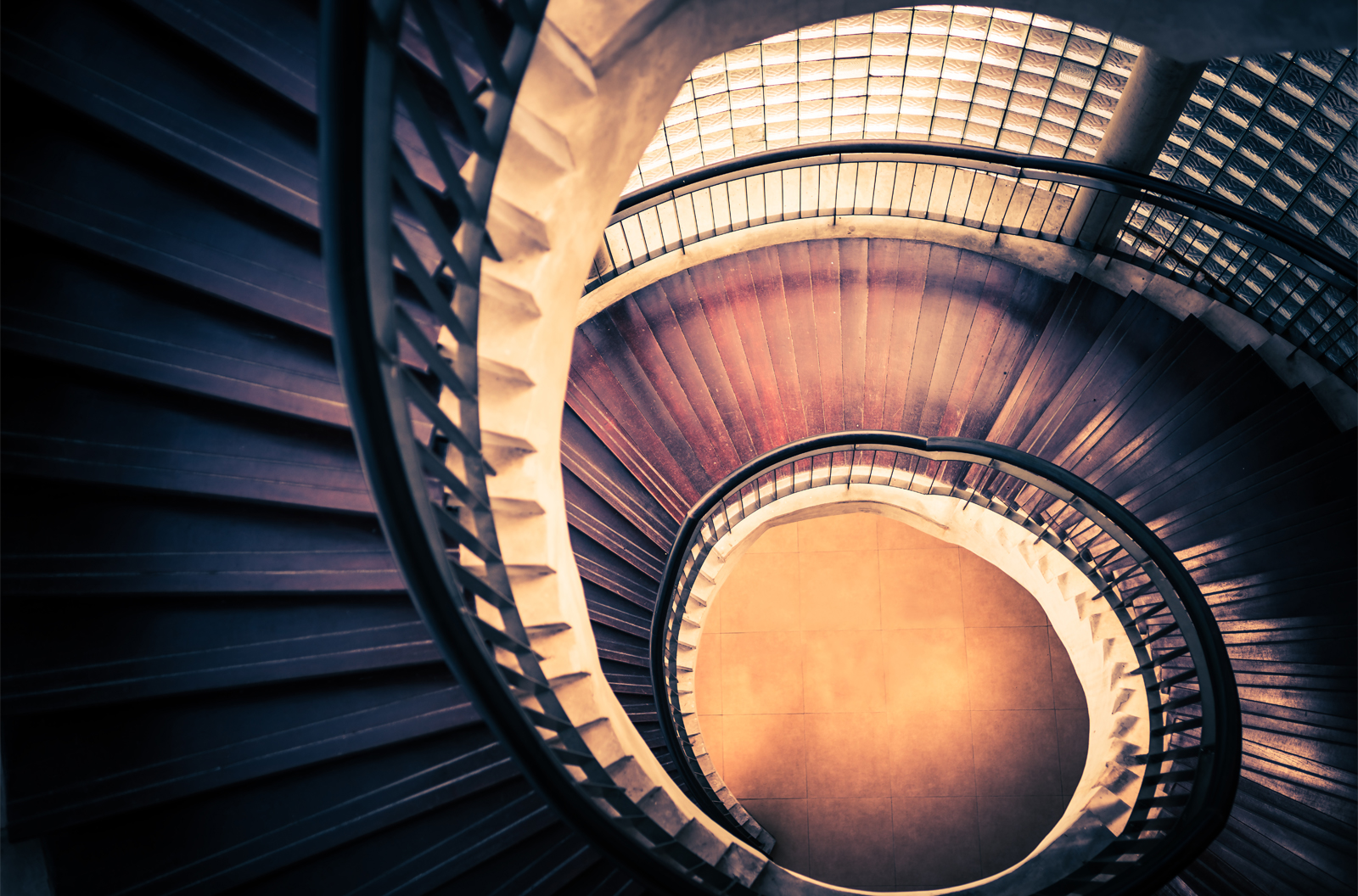 If you look closely, you will start to notice the golden ratio constantly shows up both in nature and man-made designs. Below are some popular examples that will show how the golden ratio has been used throughout art, design, photography, and nature.

The Golden Ratio in Art 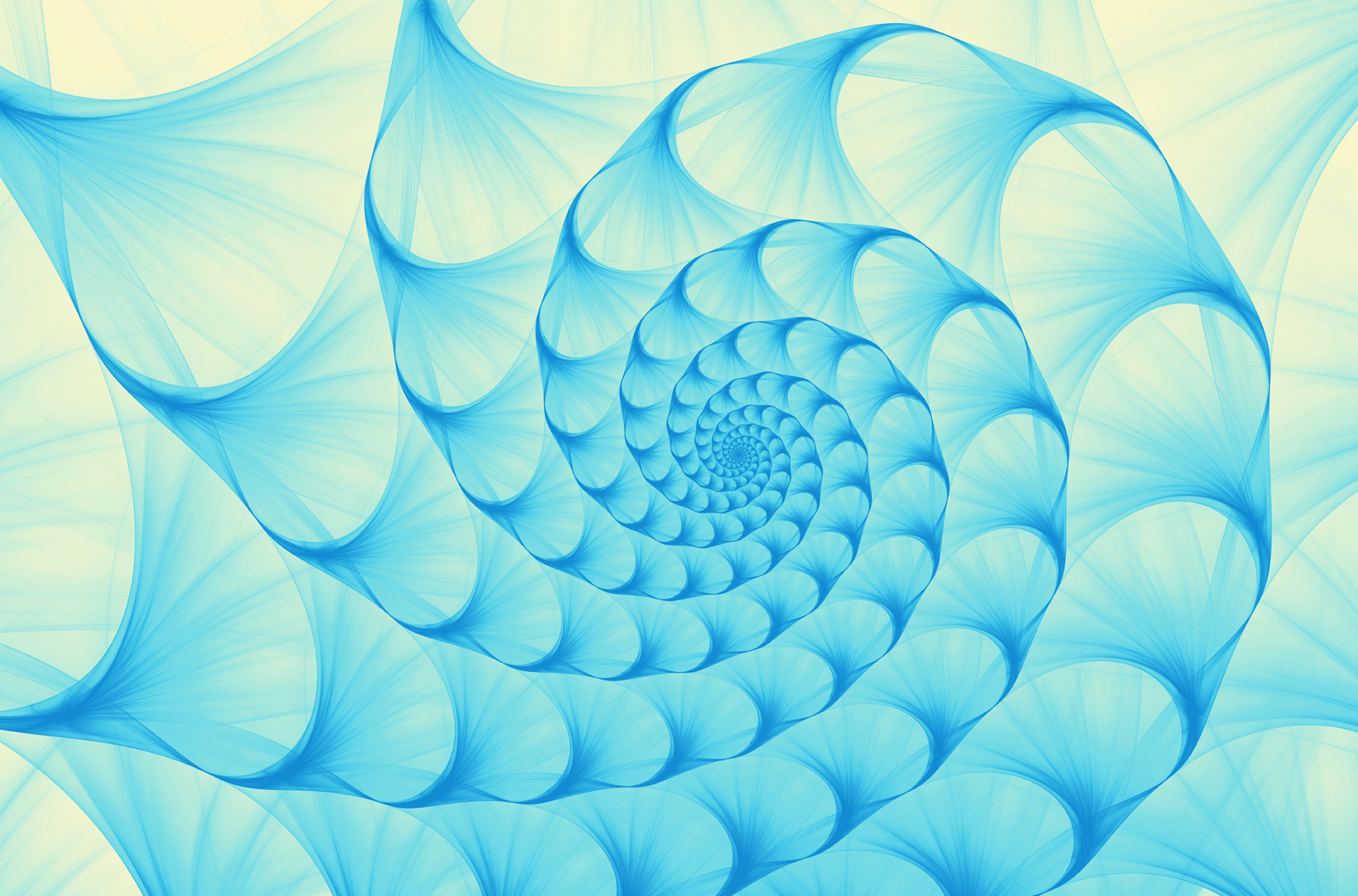 With a pattern that is naturally pleasing to the eye, the golden ratio (intentionally or unintentionally) has been used throughout history in some of the most treasured and easily recognizable works of art.

The Golden Ratio in Design

The use of the golden ratio and its associated shapes can be found in much of the branding for widely recognized and popular companies such as Pepsi and National Geographic.

The Golden Ratio in Photography

Professional photographs are often composed based on the general rule of the golden ratio spiral. A viewer’s eye will naturally follow the spiral to its center, so subjects should be placed here for maximum visual impact.

The Golden Ratio in Nature 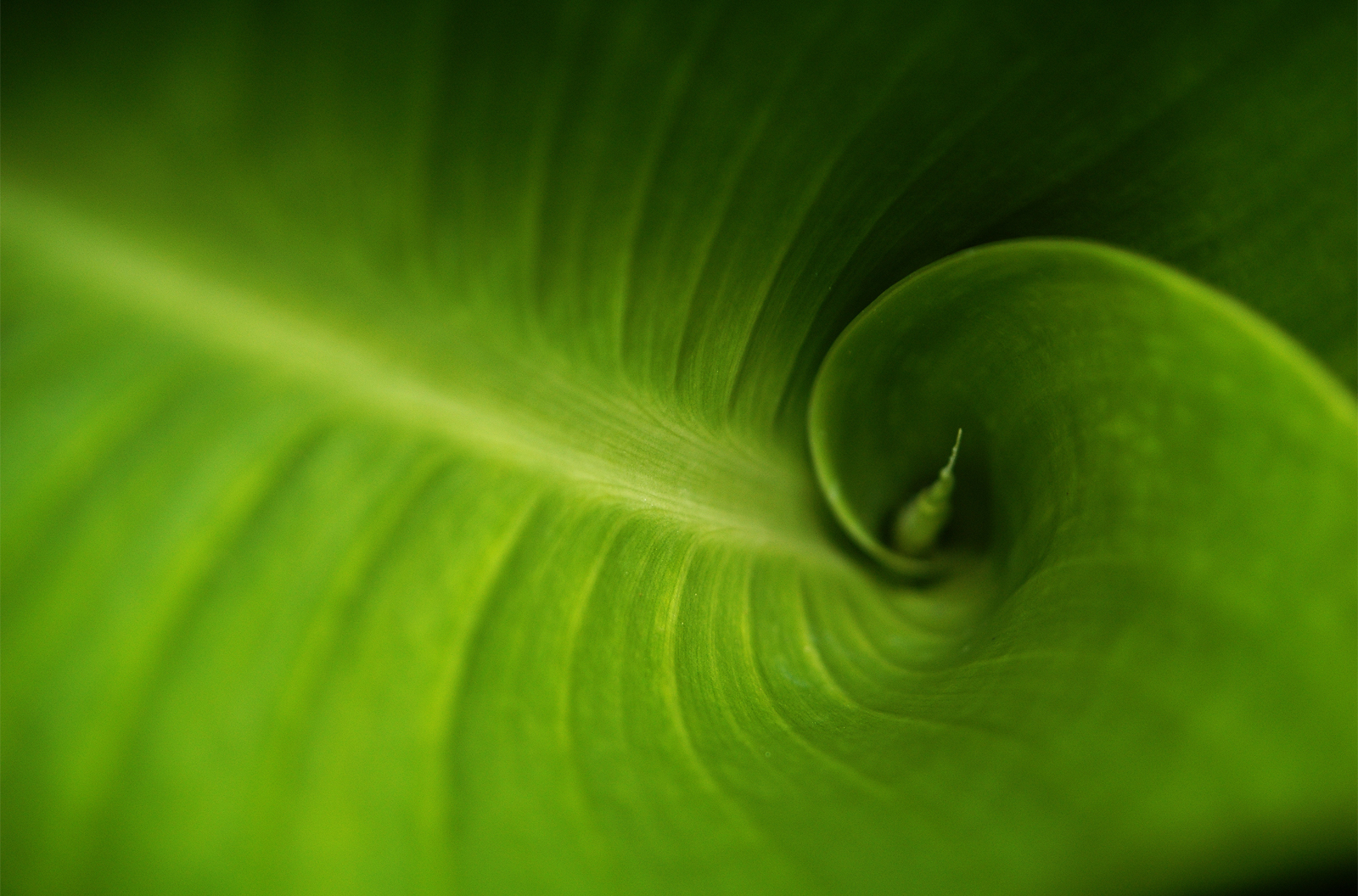 The golden ratio turns up frequently in the natural world. It is seen in everything from flowers to seashells and even hurricanes.

Tools for Calculating the Golden Ratio

While it’s helpful to understand the math behind the golden ratio, there are tons of online calculators and templates that can help speed up the process if the numbers start to feel overwhelming.

Understanding the golden ratio and how it can be used takes practice, but now that you’ve learned the basics, it can serve as a fantastic guideline for leveling up your next design. For stock photography, vectors, and other designs that showcase the golden ratio in action, check out our library of images at iStock.