If you’ve ever posted an image to social media or printed out a picture, you’ve had to deal with aspect ratios. Having questions or being confused about aspect ratios is common. Luckily, the basics of understanding how the numbers work together is quite simple.

While the options can seem endless, you don’t have to be a math major or a professional graphic designer to calculate the best aspect ratio for your next project.

What is an Aspect Ratio?

An aspect ratio is the width of an image in relation to its height. It is commonly written as two numbers and separated by a colon (such as 1:1 or 16:9). Width is always listed as the first number followed by the height. Aspect ratios are a universally understood way to describe the general shape of an image, allowing designers to quickly make changes based on the specific needs of a project.

It’s important to remember that aspect ratios can change depending on the platform or print in which the image or graphic is presented. Understanding the difference in aspect ratios and how to adjust for these changes will allow you to create striking visual content regardless of where the image is being used. Using the right aspect ratios for a platform will ensure your images are displayed as intended without stretching, cropping, or resolution loss — a critical part of any design.

How Does Image Size Relate to the Aspect Ratio?

Pixels are often the unit of measurement used to express the width and height of a photo for digital or web use. As an example, a square image that is 1080 x 1080 pixels would have an aspect ratio of 1:1 — or the width of the image in relation to its height. An image that is 500 x 500 pixels has the same 1:1 aspect ratio. The images are clearly different sizes but have the same aspect ratio because of the identical relation of image width to image height.

Here are some common digital image sizes and their corresponding aspect ratios.

Which Aspect Ratio Is Best for My Project?

The best aspect ratio for a project will vary depending on several different factors. It’s important to ask yourself a few key questions before jumping into cropping or image resizing. Consider the following when choosing the best image and aspect ratio for your next project:

Focusing on the primary intent for the image allows you to identify the best aspect ratio to suit your needs. When you become familiar with the most common aspect ratios across a variety of situations, you can easily adapt and edit an image based on the specific platform and goal at hand.

What Is a Good Aspect Ratio?

While there is an endless amount of potential aspect ratios, there are a few commonly used aspect ratios that outshine the rest in popularity and everyday usage. The following aspect ratios will cover the recommended standards and best practices you can expect to find across the majority of social platforms, video, and print.

With an average of over 95 million images being uploaded on to social platforms every day, it’s important to understand which aspect ratios for social and web platforms will help images look and perform their best. 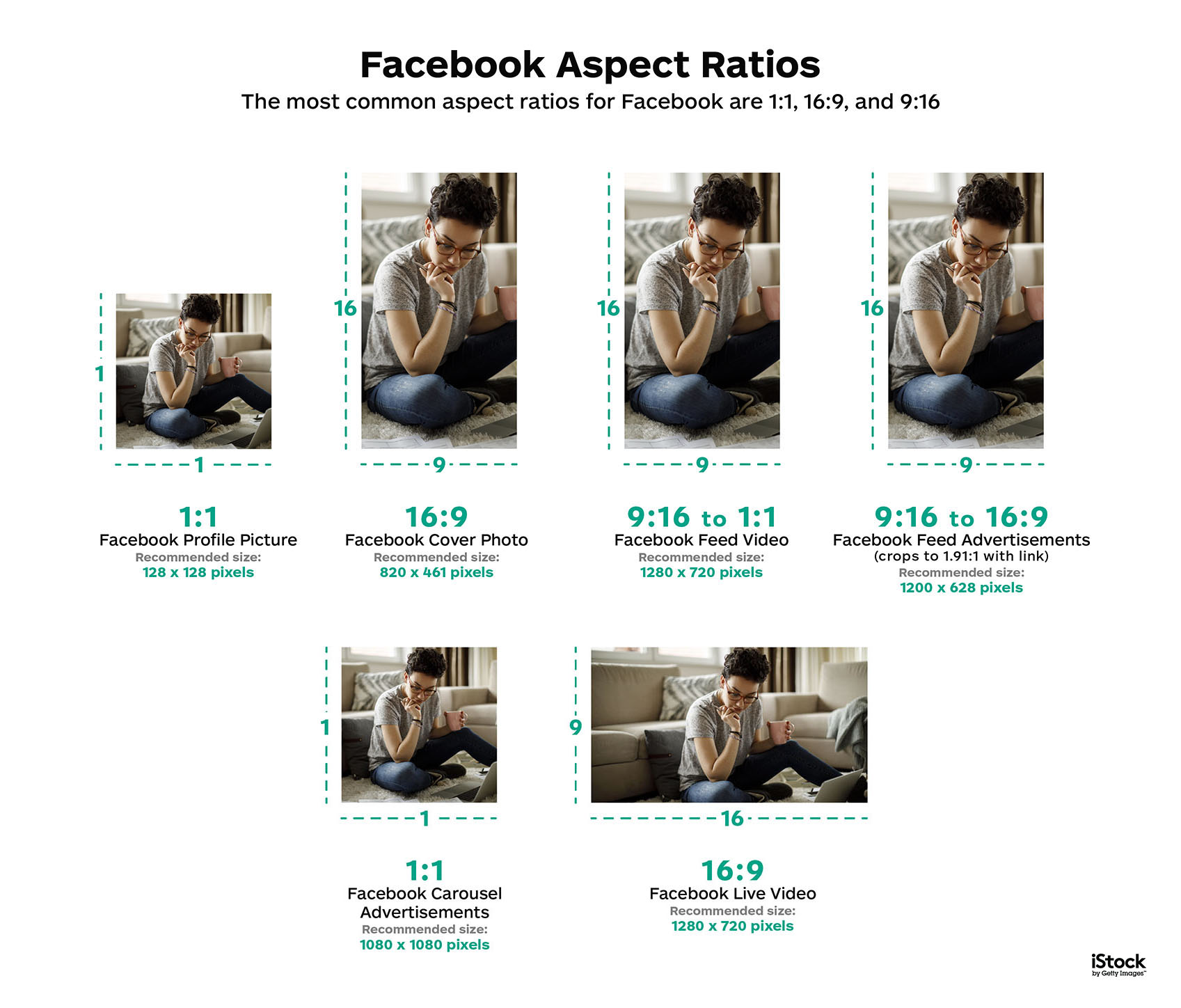 The most common aspect ratios for Instagram are 1:1 and 9:16. 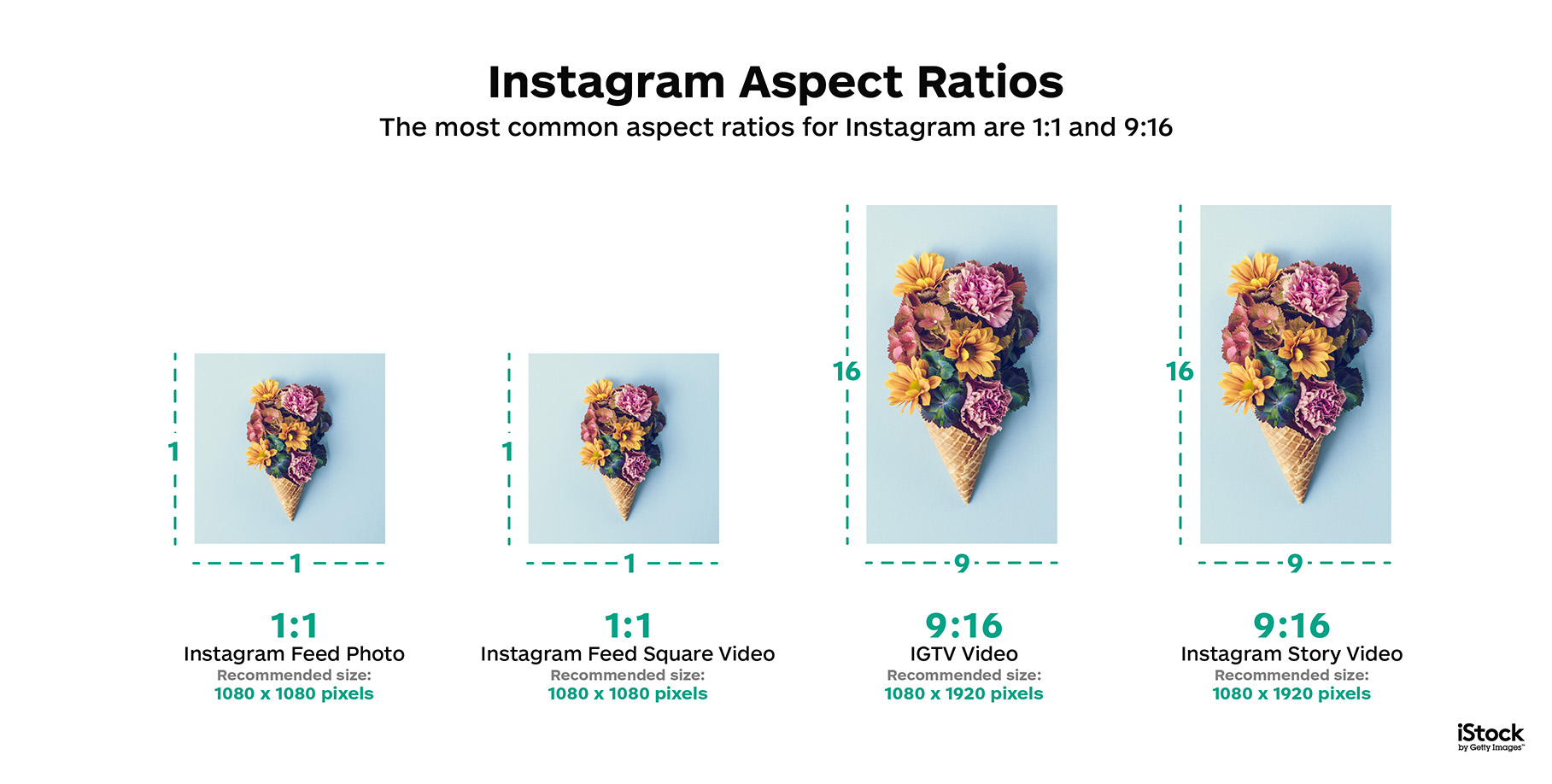 The most common aspect ratio for Snapchat is 9:16. 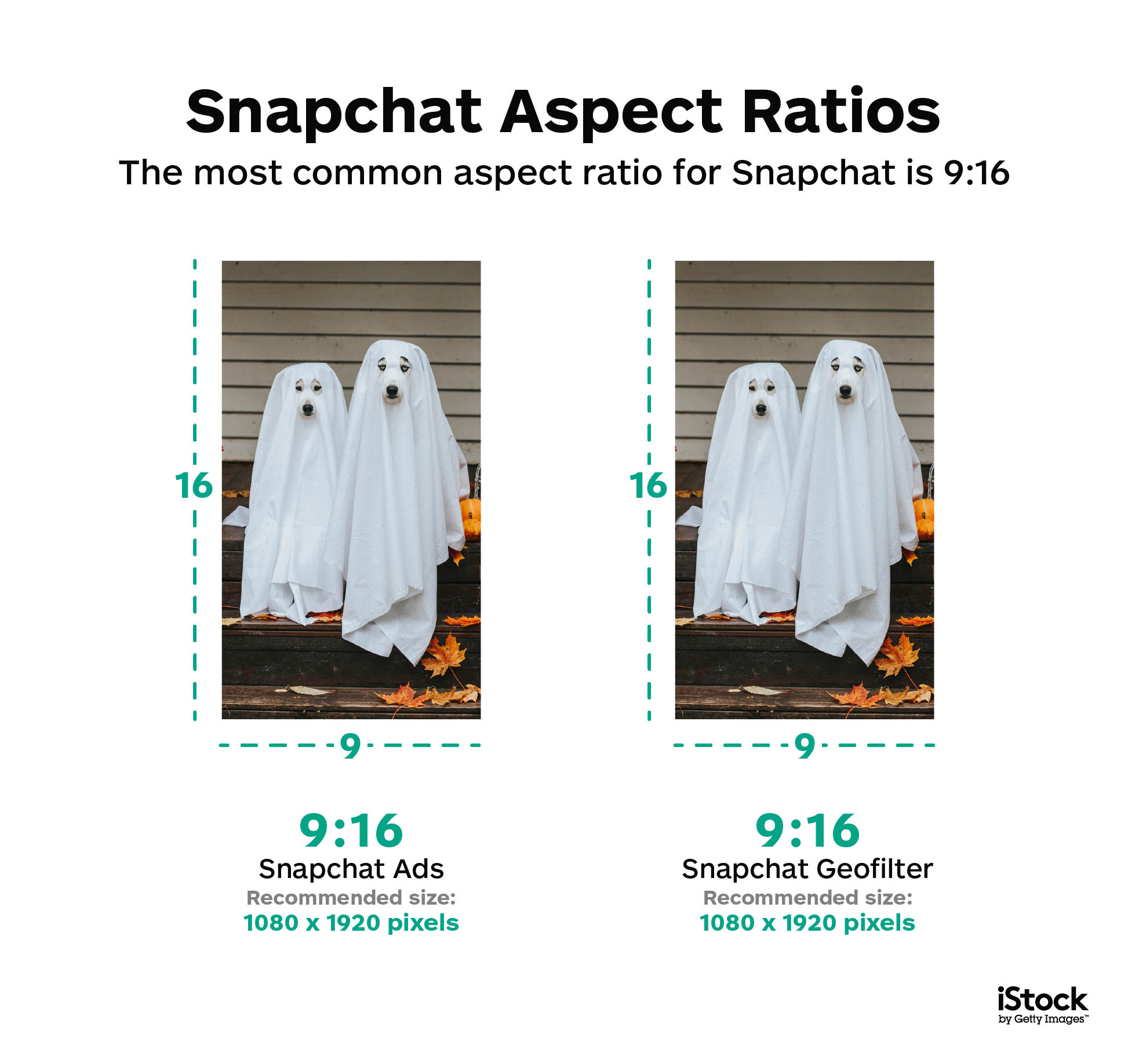 The following aspect ratios are considered standard for Twitter images.

The most common aspect ratios for Pinterest are 1:1 and 2:3. 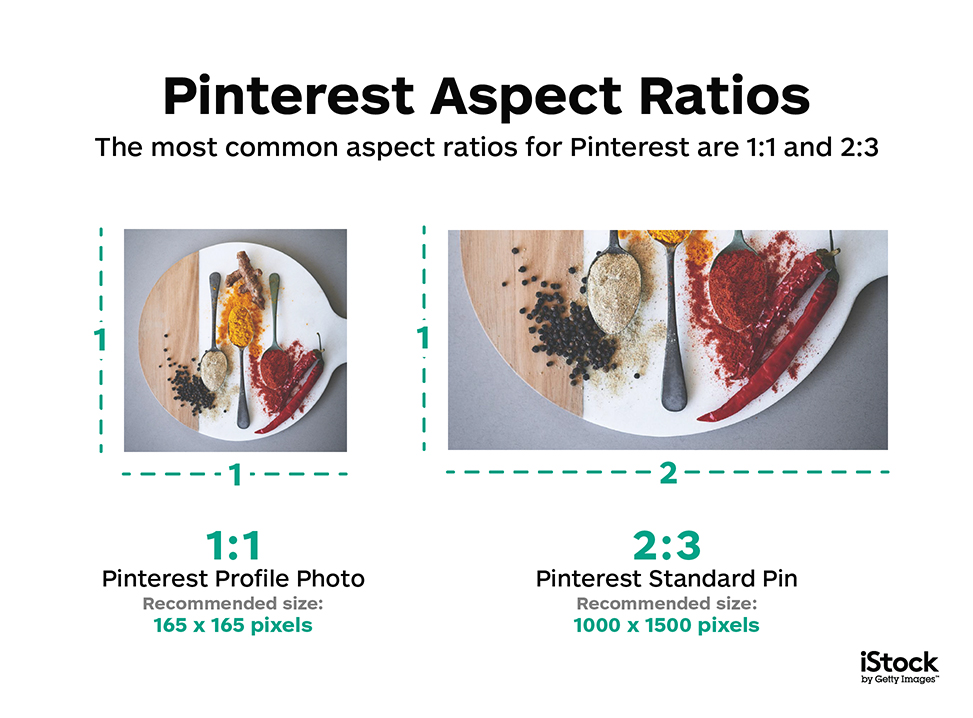 There are several commonly used aspect ratios for LinkedIn, notably 1:1 and 4:1. 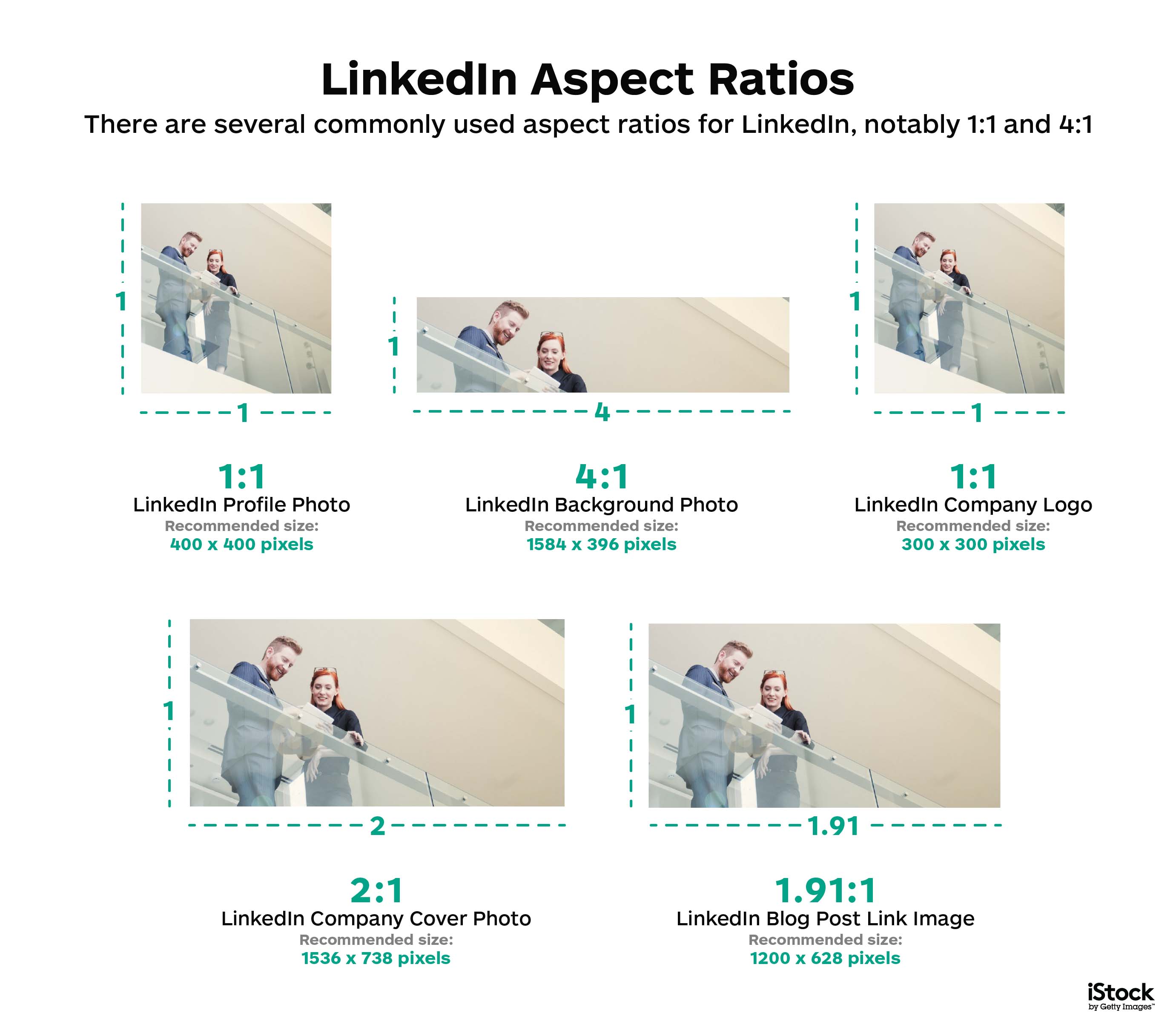 The most common aspect ratio for film and video is 16:9 with the exception of older televisions and devices that display in 4:3.

To learn more, read our guide on Video Aspect Ratios.

The most common aspect ratios for standard photography and art prints are 3:2 and 5:4. 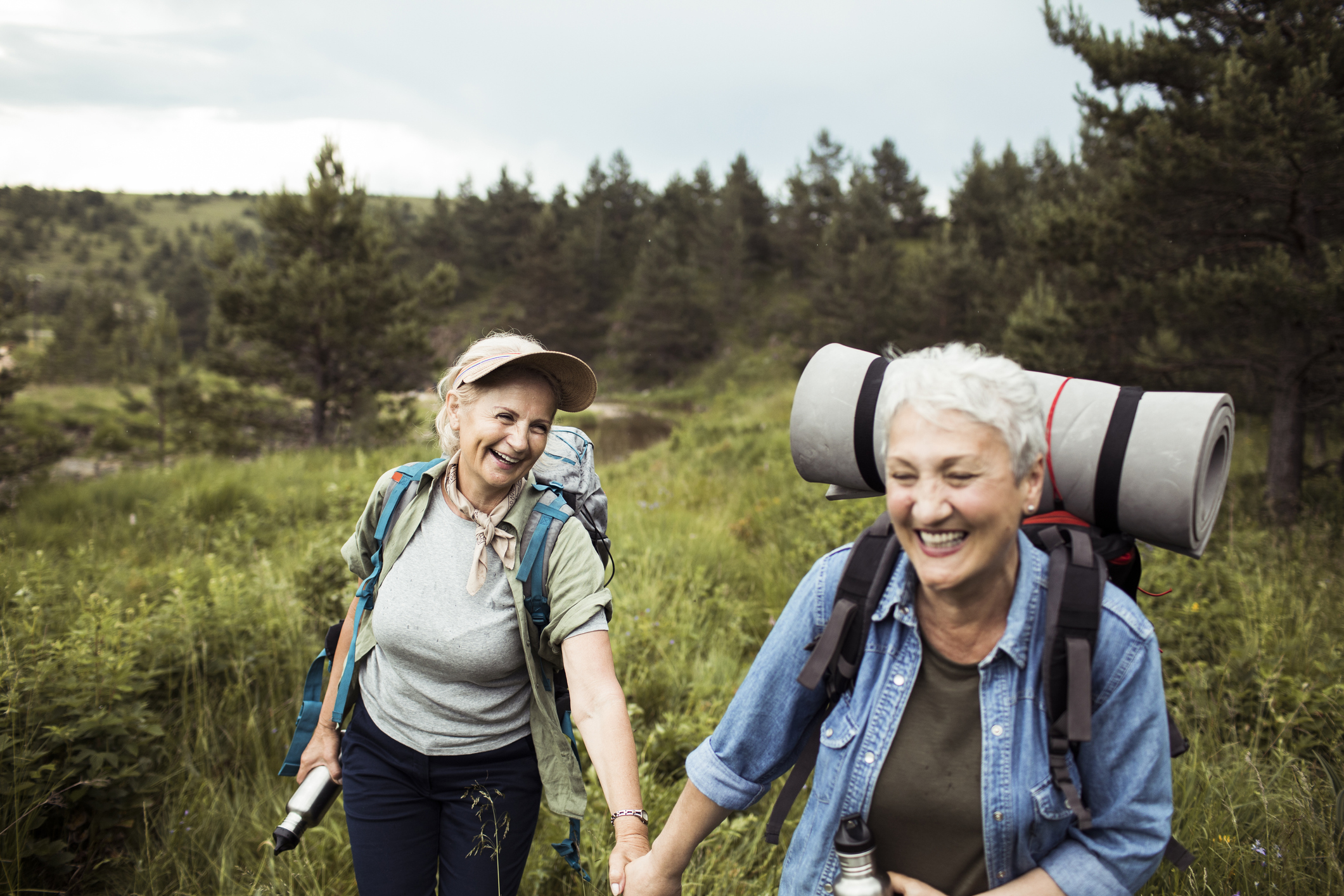 What Is the Aspect Ratio of My Image?

You’ve picked out the perfect image for your project, but does it match the best aspect ratio for the online platform or print size you will be using? Selecting an image before knowing the required size or aspect ratio can cause design headaches, but there are several tools and tricks that can be used to calculate the aspect ratio and adjust the image as needed.

Knowing how to self-calculate the aspect ratio is helpful in a pinch, and there are many online resources that will do the math quickly and effectively. If you know the size of the image in pixels or inches, an aspect ratio calculator will allow you to input the width and height to determine the aspect ratio.

How to Resize an Image Without Changing the Aspect Ratio

You can use a formula to define a new size for an image while keeping its original aspect ratio intact.

For example, let’s say you have an image that is 1920 x 1080 pixels with an aspect ratio of 16:9, but the platform where the image will be hosted has a width restriction of 1280 pixels. The goal is to calculate what the new height of the image should be while preserving its original aspect ratio of 16:9 — allowing the image to be resized to the new width restrictions without requiring any loss of the original image.

From this calculation, we now know that in order to fit the new platform, the image will need to be resized to 1280 x 720 pixels. This resizing will allow the image to stay in its original aspect ratio of 16:9 without impacting how the image will be displayed on-screen even though it is now a smaller size.

How to Change the Aspect Ratio of an Image

An image that looks great on one website may look funny when switched to a new medium with a different aspect ratio. Curating a single image for use across multiple social platforms or print sizes will at times require manually changing the aspect ratio and image size several times in order to avoid unsightly stretching, cropping, or resolution loss. 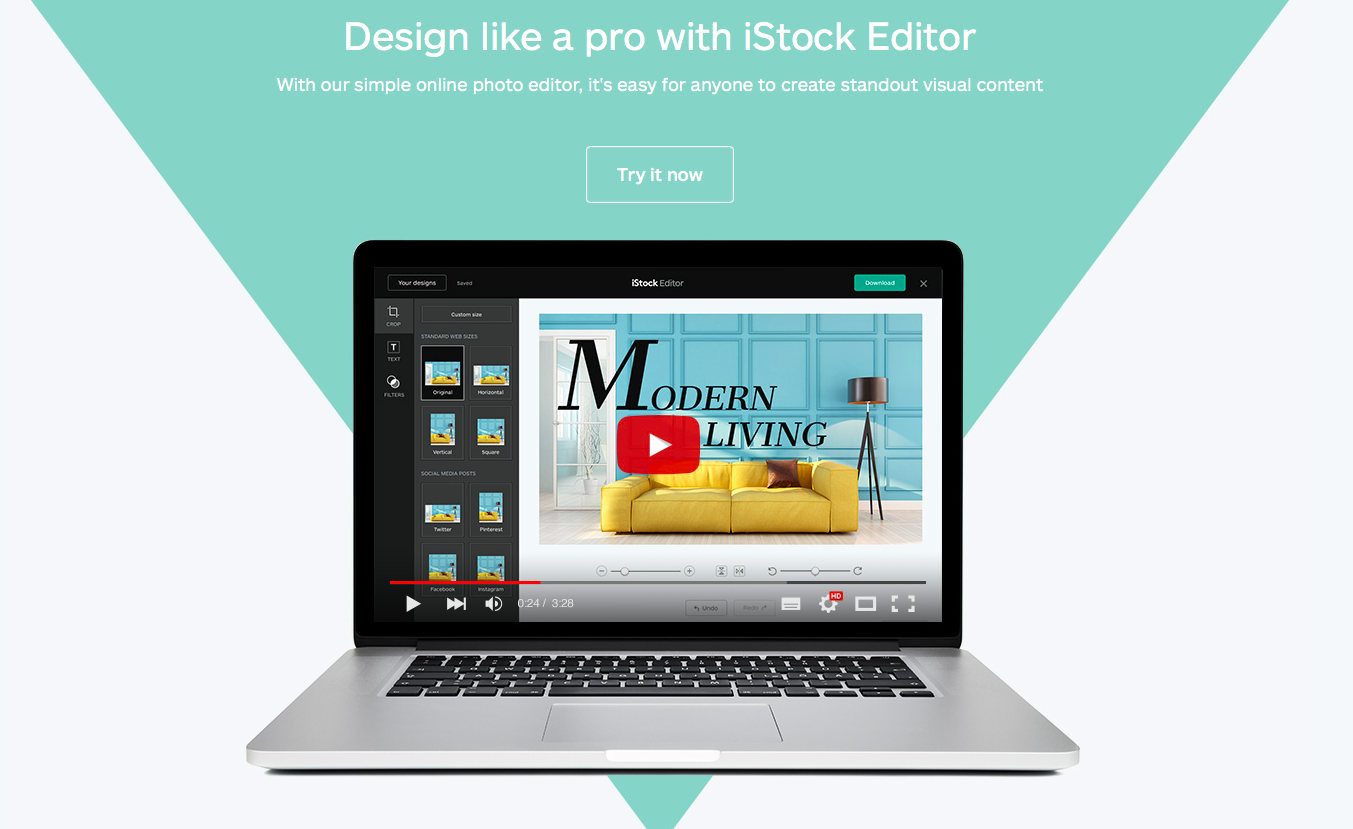 A simple online photo editor like iStock Editor comes with preselected crop sizes covering the most popular aspect ratios and image sizes across web and print, and allows you to easily set custom sizes for unique aspect ratios or exact image sizes. Simply upload your image to the editor, and use the built-in or manual crop tools to perfectly set, crop, or resize your image to match the required aspect ratio.

Making sure that the image matches the aspect ratio for a desired platform allows you to create memorable visual content across all mediums without the distraction of an unflattering crop or image quality loss.

Ready to start designing? Browse our collection of stock photos and vectors to find the perfect image for your next project.